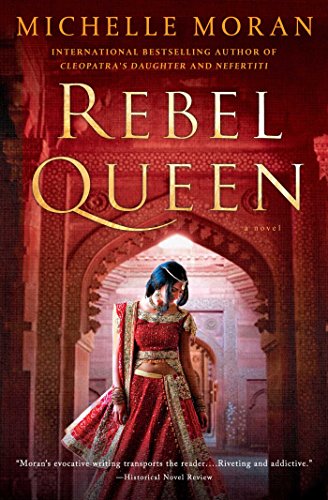 Rebel Queen recounts the story of Sita, a beautiful young woman from a remote village in nineteenth century India who is granted a rare opportunity to serve in Queen Lakshmi’s elite all-female army, the Durga Daal. Leaving behind her widowed father and young sister, Sita travels to the kingdom of Jhansi and begins a new life of opulence and excitement, all while saving money for her sister’s dowry. Her good luck is short-lived, however, as the British army gains a stronghold in India and threatens to take over Queen Lakshmi’s throne. Intrigue, deception, murder, and culture-clashes ensue, but the Queen does not give up her kingdom without a fight. Sita, ever faithful to her queen, pledges her allegiance to the kingdom, even though it means she must sacrifice her beloved family and a way of life that can never be reclaimed. Rebel Queen is as heartbreaking as it is exhilarating—a rare glimpse into the making of an empire, and an examination of power, privilege, and loss.

1. Rebel Queen opens with an epigraph from George Bernard Shaw: “Every Englishman is born with a certain miraculous power that makes him master of the world…that it is his moral and religious duty to conquer those who have got the things he wants.” What tone does this quote set for the novel? How does Rebel Queen address issue of colonization? Do you think that the novel portrays the British as merely the aggressor, or are they also partly victims?

2. On page 3, the aged Sita recounts running into a British journalist who wants to publish Sita’s story of the rani and the loss of the kingdom of Jhansi. When she hesitates, the journalist replies, “We’ve all done things we’d rather keep in the dark. It’s only by shedding light on them that our demons can disappear” (3). What “demons” does Sita have? Do you think that telling her story rids her of these demons? Why or why not?

3. Discuss the ways in which gender roles are twisted and, at times, defied in Rebel Queen. Does Sita live her life according to her maid Avani’s belief that only “a man can change his life…a woman can only change her appearance” (27)? When Sita joins the Durga Daal, does she change more than her appearance? Consider, too, how the rani and her husband fit into the question of true change versus the appearance of change. Is one character the most successful at changing?

4. How would you characterize the rani? Is she a likable character? Is she a good ruler of her kingdom? Is she just and compassionate? Do you think she lives up to the title of the Rebel Queen, and is being rebellious her tragic flaw?

5. Revisit the scene, beginning on page 129, when Kahini publicly embarrasses the young petitioner in the ladies’ durbar because she is from a poor village. How does Sita’s speech change not just the young girl’s future, but the future of the story as well? When she says, “some people are so impoverished all they have is gold” (130), which character do you think she is addressing? In Sita’s case, do you think her words are her riches, her own form of gold?

6. Many of the characters in Rebel Queen are cruel, and in fact Sita claims that moving to the rani’s palace made her “understand more about cruelty” (170), including the cruel nature of her own grandmother. Who would you name as the cruelest character in the novel? Is the cruelness understandable, if not justifiable? Why or why not?

7. Discuss the line of Rumi’s poetry that haunts Sita: “Why are you so content with a love that turns you yellow?” (173). Do you agree with Sita that this line implies that some love is mediocre, or even unhealthy? Is it possible that love can lead to the worst version of yourself, rather than the best? Which examples of the many kinds of love might be labeled “yellow” in the novel? Consider the rani, Kahini, Sita, Arjun, Anu, and Sita’s Grandmother in your response.

8. How does the death of the rani’s son change the course of the novel? Do you think his death prefigures the loss of her kingdom? Do both losses—the personal and the public—stem from greed? Explain.

9. Compare and contrast the rani with Queen Victoria of England. How are the two similar? How do they differ? Does each use their femininity as an effective source of power?

10. “We stood around the breach in the wall, weapons readied, listening to the sound of birds calling to one another. It didn’t matter to them whether we slaughtered one another, or even who won. Tomorrow, they would be signing even if all of us were floating in the Ganges” (312). Consider this quote as a commentary on the nature of war. Does Sita, the narrator of the novel, believe there is ever a winner in war? In this case, who won and who lost, and at what expense?

11. On page 316 Sita writes, “the enemy had come from within, not without.” How does loss, interior and exterior, function as a possible theme in Rebel Queen? Do Kahini’s actions weaken the rani’s kingdom enough to make it susceptible to the British? Do you think that there is always an interior enemy who opens the door, so to speak, for the outside one? Consider Sita’s own family as an example.

12. Do you agree with Sita’s decision to leave her pregnant sister behind and rejoin the rani? What does this decision reveal about Sita? Would you have made the same decision in her place? Is it possible to forgive oneself for the misfortunes of those we love?

1. For Sita’s father, reading the classics opened up the world to him, “a world in which he’d never know the sound of his child’s voice or hear his wife sing ragas to Lord Shiva again” (9). And for Sita, a woman made to observe purdah, literature had the power to take her beyond the four walls of her own home. Have your book club revisit some classic literature beloved by Sita and her father, such as Shakespeare’s Othello or The Merchant of Venice, or look for productions of these plays at your local theater. Try to imagine yourselves confined to only your home as you read or watch the play. Afterwards, discuss the ways in which these texts have the ability to transform both you and the world. What lessons do these classic plays teach us that can be directly applied to our lives? To Sita’s? What is it about Shakespeare’s language that makes him sound so fresh all these years later?

2. On page 68, the rani’s Dewan compares Sita to the Indian painter Nihâl Chand’s ideal woman: “pale cheeks, sensuous lips, a high forehead, thin brows, and wide lotus-blossom eyes.” With your book club, study a few paintings by Chand, paying particular attention to his version of ideal beauty (the painting can be found here: www.exoticindiaart.com/product/paintings/bani-thani-portrait-of-lady-who-is-model-of-beauty-HL96/). After enjoying the artwork, have a conversation with your book club about the nature of beauty. What do you notice about the paintings? What words would you use to describe the women portrayed? Why do you think Sita says that to be compared to Chand’s Bani Thani is “as much a compliment as an insult” (68)? Is Sita’s beauty a help or a hindrance to her? Consider how being beautiful affects the other characters in the novel. If you had to choose to be skilled or beautiful, which would you choose and why? Do you think Sita would choose her skills over her beauty?

3. Before the British formally took over the kingdom of Jhansi there was health and happiness in the rani’s palace—and a lot of food. Sita lovingly describes one meal “of steaming rice, curries made with green chilies and coriander, and vegetables cooked in heavy sauces” (94). Have a dinner party with your book club in which you recreate this menu. Over dinner, discuss the many examples of loss that occur in Rebel Queen. Is it difficult for the characters to mourn personal losses in the midst of public loss? Have you ever been in a similar situation? Share with the group your own story of loss.